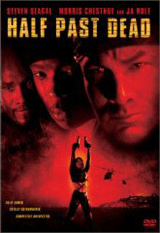 Half Past Dead is a spy action film for generation Y or Z. In some ways it may not seem like a spy film at all, but Steven Seagal’s character is an undercover F.B.I. agent. Clearly that means it is a spy movie, but it is not in the classic style. In fact, when watching the film, we are not supposed to know who the ‘spy’ is, which is a key plot point and adds to the intrigue. At this point, you are probably saying, “why did you spoil it?” On the cover of the DVD I saw, it clearly states that ‘Half Past Dead sees Seagal as an undercover F.B.I. agent…’ No surprises left. Onto the movie itself.

Akeido Master, Steven Seagal plays Sasha Petrosevitch, a career criminal, who specialises in stealing and driving fast cars. When we first meet Sasha, he is awoken by his employer, Nick Frazier (Ja Rule), and his boss, the head of the whole syndicate. It seems that the syndicate has an F.B.I. informer in it’s midst. Sasha is forced to undergo a polygraph test, which he passes with flying colours. He is in the clear, and free to continue his criminal activities.

That night, after Sasha and Frazier have boosted a car and taken it to a chop-shop to be altered, the F.B.I. storm the building. The F.B.I team leader, Special Agent Ellen Williams (Claudia Christian) tries to convince Frazier to surrender. Instead, Frazier keeps winking at her, and threatening to shoot it out. We, the viewers, are supposed to think that the ‘winking’ is some kind of code to the F.B.I., and that Frazier is the informant. It is in fact a nervous tick, and he continues to do it throughout the movie. But none-the-less, a nice red herring. Naturally enough the standoff between Frazier and his men, and the F.B.I. escalates and a firefight results.

In the gun battle, Sasha is shot. We next see the medics working feverishly in an attempt to bring him back to life. The monitor beside them shows a flat-line, and although not reflected in the movie, some twenty two minutes pass before he is revived. In this movie, dying and being brought back to life is called ‘Half Past Dead’.

The film skips ahead nine months, and Alcatraz Prison has reopened. It is now called New Alcatraz, and it houses the worst of the worst. The newest lot of arrivals include Sasha and Frazier. Although arriving at the same time, they have spent the preceding nine months in different prisons. They have not seen each other since the night of the shootout.

The film has many awkward moments, but surely the most surreal is when the new arrivals are marched through in single file to their cells. Seagal’s strut has to be seen to be believed. All the other young punks glide through the gates with attitude, but middle-aged Seagal’s head wobbles without rhythm, like a dashboard ornament in an old car. If I didn’t know better, I’d say it was a comedy routine.

In general, this film has a youthful edge. It was never made for my generation. It was made for fifteen year old boys. So it’s okay if I don’t like it. Every generation has their own thing. So why is a dinosaur like Steven Seagal doing acting with Ja Rule and Kurupt. Or more to the point, what do the youngsters want with Steven Seagal? I don’t have an answer, but Seagal’s attempt to be young, hip and ‘with it’, dude, are clumsy.

Anyway, back to the story. New Alcatraz has a brand spanking new execution chamber, and on this evening it is going to be christened. Lester McKenna (Bruce Weitz), a prisoner who has been appealing against his sentence for seventeen years is to be executed at midnight. But Lester has a backstory. All those years ago, he stole two hundred million dollars worth of gold bars. And in the time he has been in prison, he has never divulged their location to anyone. It seems like his secret is going to go to the grave with him.

One militant group of mercenaries, run by Donald Robert Johnson (Morris Chestnut) has other ideas. His team parachute into Alcatraz, eliminating the guards on the outside. Once inside, they systematically make their way to the execution chamber, killing anyone who stands in their way. Initially the inmates do not pose a problem, as they are happy to be freed from their cells and support any breakdown of the ‘system’. But all guards are shot.

Johnson and his mercenaries’ plan was simple. Parachute in. Get Lester. And then a helicopter, will meet them, and fly them to safety. Well it ‘was’ simple. Unfortunately for the merc’s, a violent storm hits San Francisco. The helicopter pilot, who was coming to retrieve them, was flying blind as he approached Alcatraz. As he attempted to land, he hit one of the guard towers, and the helicopter crashed.

Now Johnson and Co. have no way out. They take everyone hostage, including Lester and the High Court Judge, Jane McPherson (Linda Thorson- Avengers fans will remember her as Tara King), who is attending the condemned prisoner’s execution. Once the hostages have been taken, it is a different ballgame, and it is up to Sasha and a group of misfit prisoners to take back the prison and free the hostages. Yep, it’s a lot like Seagal’s hit film Under Siege, and with the Alcatraz setting, there is a bit of The Rock in there too. But Half Past Dead is not up to their standard.

If you take Half Past Dead for what it is, a loud, noisy action flick, aimed at the youth market, then it isn’t too bad. But more seasoned viewers will find that they have seen this all before, and performed by much more charismatic actors than we have on display here.

Apparently a sequel has been made to this called (funnily enough) Half Past Dead 2. Steven Seagal has opted out on this one, and Bill Goldberg plays the lead.