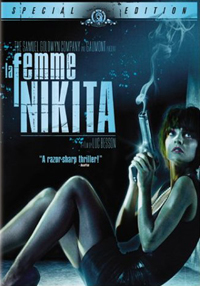 Nikita (Anne Parillaud) is a junkie. Desperately in need of a fix, she and some of her drug addled buddies break into a pharmacist in an attempt to score some goodies to ease their pain. The burglary doesn’t go to plan and the police arrive on the scene with guns-a-blazin’. After the shoot-out, Nikita is the only one of her party left alive but seemingly in a catatonic state. A police officer comes to her aid only to have his brains blown out by Nikita, who barely knows what she is doing. She is then sentenced to thirty years in prison for her crime. That’s the opening sequence of La Femme Nikita, a French post punk, new wave, thriller by director Luc Besson.

Nikita is an animal. One who has rebelled against the system. At the point of being imprisoned, she is made an offer. She can either be trained as a assassin or the sentence can stand. She chooses to be trained. But that means the she becomes a part of the system that she has been rebelling against. But she believes she is tougher than that. She thinks she can complete the training and still be the same anti-social miscreant that she was when she began. But slowly, almost like a military boot camp, her individuality is beaten out of her. They begin to mould her into a cool killing machine. But the strangest thing happens. The more she is stripped down the more she learns to love and be human. I know, it all sounds rather hi-brow and pretentious. But it isn’t.

Over the years this film has become somewhat of a landmark film in the espionage genre. The simple fact that it was remade as The Assassin with Briget Fonda, and turned into a television series with Peta Wilson indicates the power La Femme Nikita had. We all know that spying is a dirty business, but generally it has been dirty men’s business. I know we’ve had heroines like Modesty Blaise and others who have shown that they are equal to the James Bonds of the world. And we’ve had a swag of evil villainesses, such as Sumuru, Madame Sin or even Rosa Klebb who’ve shown the other side of the spy business. But these have all generally been the positive globe trotting style spy films. Never the bleak ‘spying is a dirty business’ performed by morally reprehensible people type of film. I am talking about Scorpio, Permission To Kill or Le Professionnel. All these films have protagonists (I won’t use the word ‘heroes’) who are fairly ugly people. La Femme Nikita is one of the first films to present a female lead in that light. The film even goes a bit further than that, showing how she became that character, and how she was ‘recruited’ by the DGSE.

The cast is pretty good. Parillaud portrays Nikita with a stoic indestructible grace. Tchéky Karyo (you know that French guy who’s in everything but you can’t remember his name) is her case officer and mentor, Bob. Jean-Hughes Anglade plays Marco, the man she meets on the outside. Jeanne Moreau, has a small role as Amande, a lady who teaches Nikita how to be feminine. And Jean Reno, who would later become Leon for the director, Luc Besson, plays Victor – The Cleaner.

Eric Serra has quite a reputation and following after his successful score for The Fifth Element, but quite frankly I find his score to be very incongruous to the images taking place on the screen. His score for Goldeneye has to be the worst Bond soundtrack ever (yep, even worse, than Bill Conti’s work on For Your Eyes Only) and his avant guarde score for La Femme Nikita has dated and doesn’t follow the events of the movie.

La Femme Nikita is a good film, maybe it is even a great film, but it was also the beginning of a new style of espionage films (and television shows). As such, it’s success lead to a whole slew of imitators which have moved on and surpassed the original in many respects. The ‘originator’ deserves credit and respect, but looking back on it now, it probably doesn’t pack the punch that it once did. Recommended