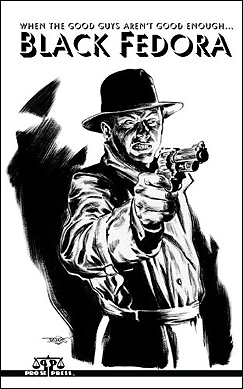 Any story, is only as good as its villain. But what happens when the story is twisted a bit, so the villain becomes the star of the show, rather than the hero? I am not talking about the Joker, Darth Vader or Blofeld. They exist as foils for their heroic counterparts, Batman, Luke Skywalker and James Bond. I am talking about the really bad guys who overshadow the goodness and light heroes – such as Fu Manchu, Dr. Mabuse or Fantomas.

Adopting the same approach – where the villain is the hero – comes Black Fedora – a compendium of three tales where the villain is the star attraction. The first tale, Sometimes They Pay in Bullets, written by B.B. Bell, is a noirish crime tale that would appeal to people who like Richard Stark’s (Donald Westlake) Parker series, Terrence McCauley’s Prohibition – or films like High Sierra (with Humphrey Bogart) or Point Blank (with Lee Marvin).

The villain in question is a man named Keller. As the story begins, Keller returns to an un-named gambling town and immediately is caught up in a turf war between two mobsters, Fabian and O’Hannoran. But Keller is not the type to align with anybody for long. He is out for himself. The story features gunfights, corrupt cops, bent politicians and a dame with a hidden agenda.

The second entry is The Warden, written by Phillip Drayer Duncan, and it is extremely different in tone and style to the first. It is a wise-cracking super-hero story. Sorry, let me rephrase that – super villain story.

The Warden, of the title, is a villain whose specialty is capturing super heroes and locking them away in a purpose built prison. This story sees him taking on Mr. Elusive in a smackdown battle in the heart of the city. The Warden is a blast from first word to last.

Rounding out the collection is The Man Who Stole Manhattan by Kevin Paul Shaw Broden, which is a steampunk adventure (with a dash of the Rocketeer thrown in for good measure). The villain is the Maestro Mechanic – who, as the title would imply, steals Manhattan.

If I have a criticism of the book (and other readers may think this is of little consequence – and may in fact be a strength) is that each of the stories are so very different. Aside from the central villainous thread, the book doesn’t feel cohesive to me. Please Note: That is not a criticism of the stories, but the package. I can imagine readers who enjoy the tough noirish thrills in Sometime They Pay in Bullets being slightly perturbed as they roll onto the lighter, wise-cracking story, The Warden. But maybe that is just me? But moving away from my curious peccadilloes, put simply, in Black Fedora, there is crime noir story, a super hero story, and a steampunk story. If you enjoy these genres, then there’s no reason you wouldn’t enjoy the book.

As advertised, the bad guys are front and center and determined to do things their way – and heaven help any lawman who gets in their way.

Here’s the press-release from Pro Se.

Welcome to the dark side. BLACK FEDORA holds stories where the hero is the villain and one person’s crime is another person’s glory. Get ready to step out of the light and take a tour of various underworlds with three tales that give a steely-eyed look at what secrets lurk beneath the BLACK FEDORA.

This exciting anthology consists of tales by B. C. Bell, Phillip Drayer Duncan, and Kevin Paul Shaw Broden and a stunning cover by the best Pulp Artist today, Douglas Klauba! Edited by Brad Mendel and Mark Beaulieu with cover design and print formatting by Sean Ali and Ebook formatting by Russ Anderson, BLACK FEDORA is so good it’s criminal.

“Villains,” Tommy Hancock, Pro Se Productions’ Editor in Chief and Partner in the company, states, “fascinate us. Since the beginning of storytelling, no tale is complete without the bad guy or gal. They capture our imagination so much that we have this almost insatiable need to turn them into the hero, even going as far as justifying the villain’s actions. From penny dreadfuls that made Billy the Kid an upstanding defender of widows and orphans to the almost fanatical fandom for types such as J. R. Ewing, villains speak to all of us.”

“In Pulp, though, the Villain didn’t necessarily ascend to Hero status. From Fu Manchu to Doctor Death (both of them), the villain, though he may have stated reasons his cause was just, was a bad guy. That’s what BLACK FEDORA is all about. Yes, it brings the evildoer to the forefront, but it doesn’t strip the character of its purpose, of its design. The bad guys in these pages are as bad as they come. Fortunately we have their stories told by three of the best writers in Genre Fiction today. This collection at least allows us all to vicariously cheer for the villain and for a little while wear the BLACK FEDORA.”

One thought on “Black Fedora”