G’day all. I am running a promotion over the next few days (from September 25th to 29th), where my first Jarvis Love novella, The LIBRIO Defection is available as an eBook for free from Amazon.

The LIBRIO Defection is a fast paced novella filled with international intrigue and espionage.

1966: The world’s greatest violinist, Soviet, Alexander Stanislas wants to defect to the West after the violent death of his half-brother. But he has one condition; he wants his Italian mistress, Belladonna Librio to come over with him.

Jarvis Love works for the Global Intelligence Network. He is young, inexperienced and about to be thrust in the explosive world of Cold War espionage for the first time. His assignment seems simple enough; locate Belladonna Librio and escort her back to London. Major Sacha Vorinski, of the Fifth Chief Directorate has other plans.

Filled with brutal fights and wild chases, The LIBRIO Defection is a white knuckle action adventure which harks back to the great spy novels of the ’60s and ’70s, but infused with the high-octane punch of a modern thriller. In this edition, also included is a sneak peek at Jarvis Love’s first full length adventure, The DANAKIL Deception.

Time for a bit of old time carnival spruiking – picture me standing on stage, first gargling from a hipflask of cheap gin, then glassy-eyed, raising a bullhorn to my mouth and doing my best Tom Waits impersonation…

“Ladies and Gentlemen, Boys and Girls, my latest novel is now available … Be warned, if you have a heart condition, it contains sequences of extreme action, excitement and DANGER!!! Set in the harsh Volcanic lowlands of north-eastern Ethiopia – a land so arid and inhospitable it is not fit for man nor beast. Into this unforgiving environment comes Jarvis Love – a young secret agent – assigned to discover the secret of the Danakil Depression – in the earth shattering thriller ‘The Danakil Deception’ – available from Amazon… Get yours now!!!”

I will now return you to normal programming… 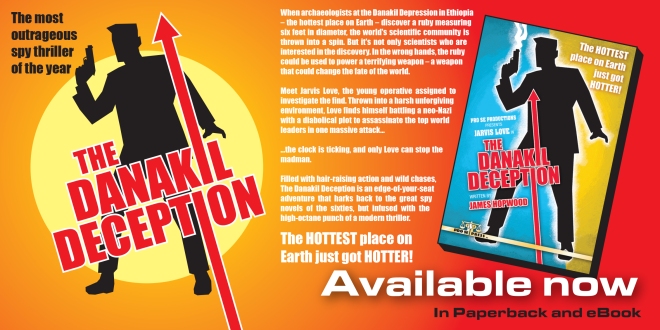 My latest spy thriller, THE DANAKIL DECEPTION, has just been released by Pro Se Productions, and I have got to say I am really happy to be part of the Pro Se family. On the surface, as Pro Se is highly regarded as a publisher of New Pulp tales, it may seem an odd fit. But I beg to differ – Pro Se has a healthy selection of espionage themed books – and more importantly a philosophy that is similar to my own. Before I go any further, don’t get me wrong, I enjoy a good thriller grounded in the here and now, and that holds a mirror to the reality of every day living. But I must confess I love a good story that drags me away from the everyday – escapist fare that takes me away from the mundane troubles and stresses of modern life, and that is what Pro Se specialises in. You don’t have to be a spy fan to be caught up in the adventures of the Rook, Thunder Jim Wade, or the Silver Manticore.

But, of course, if you’re reading this, you probably know me as a ‘spy guy’. And that’s a hat I am happy to wear. But if you combine ‘spy’ with fast paced ‘pulp adventure’ then you’ll really appreciate where I am coming from, and that’s what THE DANAKIL DECEPTION is all about.

So what is this Danakil thing I keep talking about? It’s an area in north eastern Ethiopia called the Danakil Depression. As a boy (and still as an adult), one of the many aspects I loved about a good spy story was the globetrotting. I was enthralled as I discovered cities, countries and cultures much different to my own. When i decided to write a series of spy novels, in the same spirit, I knew I had to take readers to locations that they had never been before – hence the Danakil Depression.

It’s an area of the world that is off the tourist trail. I read that it has about 70 visitors per year. It is also the hottest place on earth, with temperatures soaring up to 60 degrees C in summer. Then there’s the volcanic landscape, a virtual kaleidoscope of colour, pockmarked with salt plains and sulphurous acid pools. Sort of like a snake-bit version of Monument Valley.

So this Danakil thing – it’s a part of the world that is seldom seen, and it’s the primary location in my latest espionage thriller.

THE DANAKIL DECEPTION is the first of six full length adventures featuring agent, Jarvis Love. This story sees him young and at the beginning of his career. He makes mistakes and has to fight to make things right. And that’s one of the key elements to the series – Love’s a fighter. Many a time he finds his back to the wall, but he refuses to give in, fighting tooth and nail to stay in the game.