License To Kill, despite it’s title is not another James Bond ripoff. The roots of this film are much older. In the film Eddie Constantine plays Nick Carter. Carter these days may not be a household name, but he is one of modern literature’s oldest surviving characters. He started life in three dime store sleuth detective magazine stories penned by John Russell Coryell in 1886. Although Nick Carter was part of a double act in these stories, he was the protege of Seth Carter, it wasn’t long until the Little Giant, as he was known, took off on his own in a series of amazingly popular adventures penned by Frederic Marmaduke van Ransselaer Dey. But as they must, times change. Nick Carter detective fell out of favour – but he was reborn again at the height of spymania as the Killmaster – a secret agent N3 working for AXE. Between 1964 and 1990, there were a staggering 261 Nick Carter spy novels written.

Having said all that, this film isn’t about the Killmaster. It goes back to the old Nick Carter detective stories. The film opens – possibly in France – with a distinguished looking gentleman being shown to his car by the valet attendant. No sooner has the attendant walked away, and the car explodes in a fireball. A newspaper report the following day explains that a renowned scientist has been assassinated. Next we see another academic type (Horn-rimmed glasses / Van Dyke beard) walking the street. A car rushes past with goons leaning out the window with guns. The academic is shot down. A newspaper report informs the viewer he was a physicist named Von Brantchitz. On both occasions, as these men were killed, an Asian lady (played by Mitsouko) watches on from a balcony above.

The film skips to the USA. World famous detective, Nick Carter (Eddie Constantine) is about to go on holiday. To that end, he is refusing to take any cases, or phone calls. His long suffering secretary, Gladys (Barbara Sommer), a Moneypenny type character who loves Nick, but whose affections are not reciprocated, valiantly attempts to fend off all phone calls. Then a French journalist arrives in person. Gladys shows him around, pointing out the pictures on the wall, mementos of previous cases undertaken by Nick Carter’s father (it is never mentioned if his name is Seth). One of these old cases was the case of the Shanghai Stranger – and the case was solved with the assistance of a man named Fromentin. When Nick receives an urgent telegram from his Father’s old friend, Fromentin, he cancels his vacation and finds himself traveling incognito on a plane to Nice, on the French Riviera.

In Nice, Nick hires a car and races around the scenic coast road to Fromentin’s home. However news of Carter’s arrival has leaked and somebody is watching and waiting with a rifle, and as Nick rounds the corner, they open fire. The car goes over the edge and rolls down the embankment, crashing into some rocks beside the ocean. The car bursts into flame. Surely Nick’s goose is cooked!

Miraculously Nick survives. Although it is never stated, he may have been wearing some protective trenchcoat – later on in the story it is revealed that Nick does have a few gadgets on his person. Nick climbs out of the car and quips, “Wow, we start with a bang!” Luckily, he crashed right next to a small bar. Despite it being mid morning, it is packed with youngsters frugging and grooving out to the latest beats. Nicks arranges a lift to Fromentin’s home. There he also meets Fromentin’s grand-daughter, Catherine (Daphné Dayle).

Here Fromentin explains why he sent the telegram to Nick. Fromentin, like the gentlemen killed at the start of the movie, is a scientist working a top secret device – much like a miniature, remote control flying saucer – named Gyros Number One. Fearful that the killers will target him next, he wishes for Nick to find out who is behind it all. Before you can say sacré bleu, Nick’s up to his armpits in trouble.

License To Kill is pure pulp – as it should be. Although it could be classed as a ’60s Eurospy flick, it plays like a serial from the ’40s, with Nick finding himself in one scrape after another. I found this film to be a hoot from go to whoa – but it won’t be for everyone. It is a French Italian co-production, so it will either be dubbed or subbed (the version I watched was dubbed), and it’s in black and white. And truth be told, it is rather formulaic – I happen to like the formula – however if originality is your thing, it would be best to steer clear of this one.

Eddie Constantine made at least one other Nick Carter film, Nick Carter and the Red Club in 1965.

This follow up to Delta Force is in reality a loose reimagining of the James Bond film, Licence to Kill, which was released a year earlier.

As the film opens, the DEA is out to catch notorious South American drug baron, Ramon Cota (Billy Drago). Cota operates out of the fictitious country of San Carlos, which the US have no extradition treaty with. However, as luck would have it, Cota leave the safe haven of San Carlos for Rio, where he is to attend a masquerade ball. The DEA plan to catch him once and for all, and have a surveillance van is on hand to watch his every move. Cota arrives in a limousine, wearing a silver masking enters the ball and mingles with the guests. The DEA agents surround him and close in. They remove the mask and find that it is not Cota, but a decoy. The real Cota, and several of his heavily arms goons take up a position behind the surveillance van. As the goons open fire, the team inside the van are cut to ribbons. Cota sends a message, saying that was only a warning. It is pointless to trey and capture him.

It appears the DEA need a little help. They call in two members of Delta Force, Colonel Scott McCoy (Chuck Norris) and Major Bobby Chavez (Paul Perri). Their superior is General Taylor, played by Cannon Film regular John P. Ryan (Avenging Force / Runaway Train / Death Wish 4). Taylor has found out that Cota will be flying to Switzerland to deposit his money into a numbered account. The plane will fly over US air space for just a few minutes, near the Florida Keys.

McCoy and Chavez manage to smuggle themselves onto the plane, and when it passes over US airspace, they arrest him. Of course, they have to get him off the plane before it is out of their jurisdiction, so McCoy pushes Cota out of the plane. Anyone who has seen Moonraker, will recognise what follows. Later, Cota is brought before a judge, and his bail is set at ten million dollars – which is pocket change to a man like Cota. Chavez, frustrated by a system which will see Cota go free, loses his temper and punches Cota as he leaves the court room. As I mentioned at the top, this film borrows heavily from Licence to Kill, so if you haven’t worked it out yet, Chavez is the sacrificial Felix Leiter character. Cota gets his revenge – and McCoy vows to go in and bring the drug lord down.

While being entertaining in a low brow way, the derivative story content detracts from what may have been a serviceable action flick. Instead the viewer is constantly reminded of better films. Apart from the aforementioned Bond films (Licence to Kill / Moonraker), as Billy Drago is the villain – and he came to prominence as Frank Nitti in The Untouchables, the film also borrows some elements from that film as well. The courtroom scene at the start is reminiscent of the closing of The Untouchables – but here the villain gets away. There is also a replay of the round table scene – sans baseball bat – but non-the-less, you’d have to be blind not to miss the connection.

I have a soft spot for Chuck Norris’ action flicks – but this one doesn’t cut it.

Some quick thoughts on the 1982 four-part BBC television series of The Hound of the Baskervilles, starring everybody’s favourite Dr. Who – Tom Baker – as Sherlock Holmes. Over the years, this version has developed a reputation for being pretty bad. I am guessing a part of the reason for this is that is hasn’t been available – many people concluding that it must be bad if it has never been released. As one of the few people who could sit through the entirety of Peter Cook & Dudley Moore’s The Hound of the Baskervilles, I wondered just how bad could it be?

The answer is, it is not bad at all. It may not reach the heights of some of the other versions – the Hammer version with Peter Cushing being my favourite – but none-the-less tells the oft told tale in a professional way. Baker is a fine Holmes – but as people familiar with Hound already know, Holmes is absent from the story for a sizable amount of time. But Terence Rigby is not the worst Watson to carry the story (Robert Duvall, with his dreadful accent and voiceover in The Seven Percent Solution gets my vote for worst Watson). Like many other versions of Hound, it could be said that the ferocious canine of the title lets the series down – but I don’t believe any version has really nailed the Hound.

On the plus side, if you are a Tom Baker fan, the recent Madman DVD release has an entertaining audio commentary by Baker over all 4 episodes, which in itself almost makes it worth the price.

In Melbourne, Australia it is just ticked past 9:00am on the 11th of November. 134 years ago, on this day, Ned Kelly was hung at Old Melbourne Gaol.

And here is, what many people consider the world’s first feature film – and remember this was only made 26 years after Kelly’s death, so many of the people involved in the story were still alive.

The first dramatic narrative to run over 60 minutes in length, but now only fragments remain, many of which are as badly decomposed as Ned Kelly. It also marks the beginning of the film industry in Australia but was banned in Benalla and Wangarratta, Australia, in 1907, and then again in Adelaide in 1911.

Kelly’s actual suit of armour was borrowed from the Victorian Museum and worn in the film.

Uploaded by Films of the Public Domain. 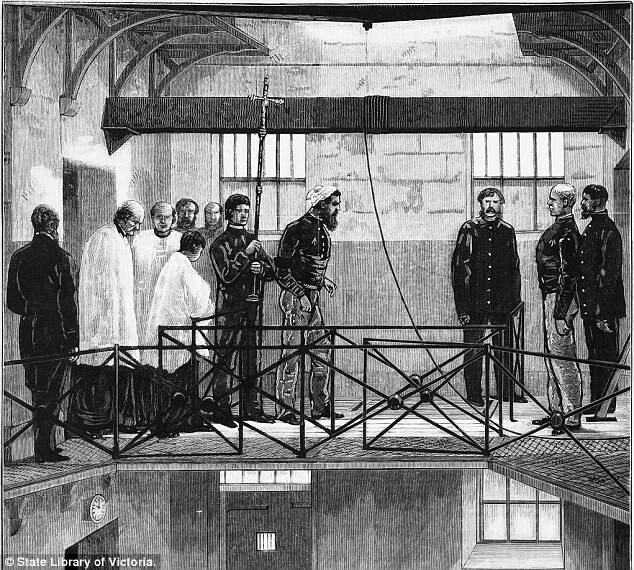 An image from the State Library of Victoria shows Ned Kelly making the walk to the gallows at Old Melbourne Gaol.

Such is Life: Led to the gallows

The Ned Kelly story – in Lego! It runs just over 9 minutes.