The latest Fight Card title, Guns of November, (with Joseph Grant – Fight Card: The Last Round of Archie Mannis behind the Jack Tunney moniker), has just been released, and it sounds like a winner to me.

FIGHT CARD: THE GUNS OF NOVEMBER 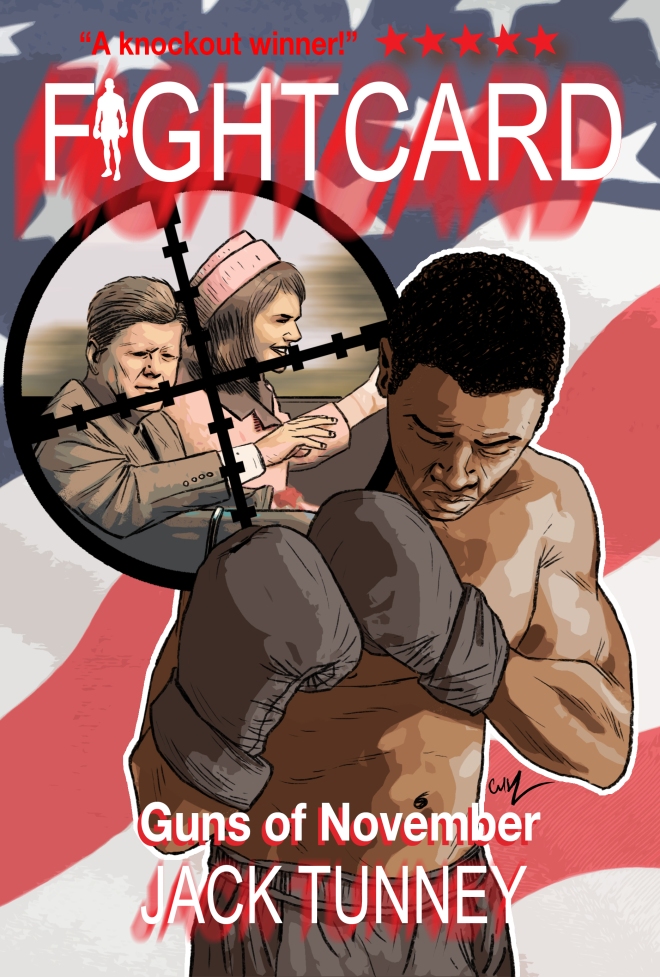 Sent to Dallas by Attorney General Robert Kennedy to investigate the disappearance of a boxer connected to a major Civil Rights violation, FBI Special Agent Jim Gregory finds himself desperately trading punches with those plotting to change the course of history.

Kidnapped, beaten, tied up, and blindfolded, young boxer Jimmy Lee Williams knows his situation is dire. Nicknamed Guns for the relentless firing power of his fists, Williams isn’t going to go down without a fight. However, this is no typical 15-rounder… and the clock is ticking toward disaster.

Mixing with a disparate group of Cuban exiles, the Mafia, the FBI, the CIA, and corrupt Dallas Police, Gregory’s search for Williams takes him into the heart of the JFK conspiracy. In the Carousel Club, owner Jack Ruby – Gregory’s old Chicago boxing opponent – introduces the undercover FBI agent to his many shady contacts, including a young, ex-Marine and Communist defector named Oswald… a man with unusual intelligence and connections to both the FBI and the CIA.

With disaster looming, the latest Fight Card novel, Guns of November, is a two-fisted take on the tragic events you thought you knew, but never imagined…

It also sports a fantastic cover by illustrator Carl Yonder.

The Shot is another short sharp tale from the Pro Se Single Shot series – being eBook tales that can be easily read on a Kindle (or eReader) while commuting, or loitering in a waiting room. And best of all they only cost .99c (or around AU $1.07).

As the story is short, I won’t detail the plot, however as a lazy comparison, The Shot is sort of like Rocky IV crossed with an episode of the Twilight Zone. I must admit I didn’t see the twist coming. Good fun. I wish it had gone a bit longer. 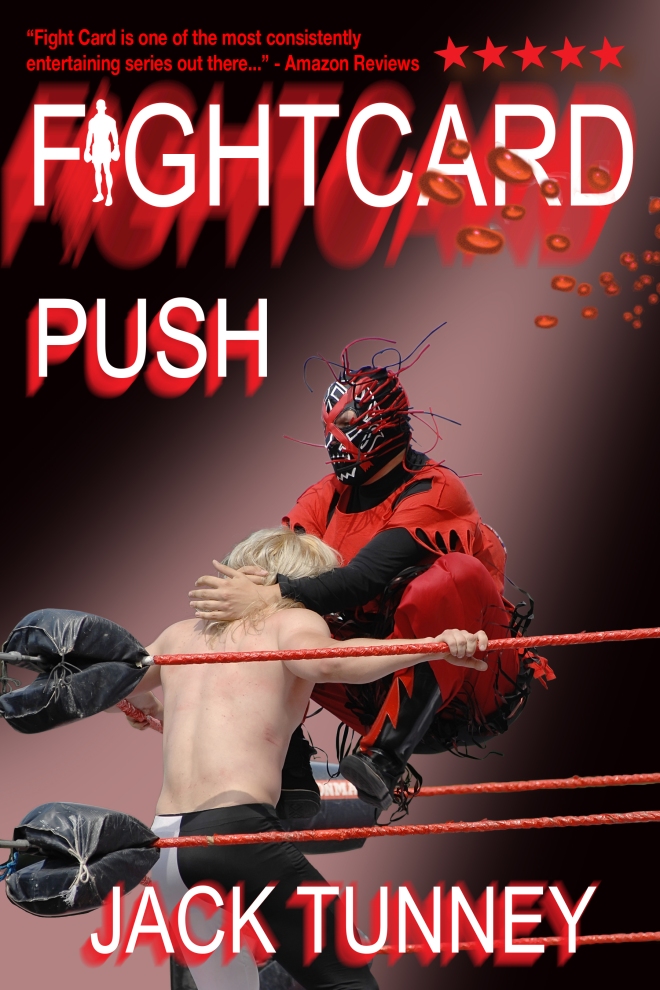 This month’s Fight Card release comes from Nathan Walpow, author of the popular Joe Portugal mystery series (www.walpow.com). Fight Card: Push takes us behind the scenes and behind the hoopla of the world of professional wrestling. Here’s the promo spiel.

You’re a ‘jobber’. You make your living by losing in the wrestling ring. You’re a good wrestler, but promoters don’t think you have what it takes to become a superstar. Then Thumper shows up. Big and strong, with a bunny-rabbit gimmick and fans eating out of his hand. His finishing move is called The Thump, and most guys don’t get up from it on their own.

One night, Thumper puts his opponent in the hospital. Not a big deal. Sure, the outcome of a wrestling match is fake. But the ‘bumps’ in the ring can be all too real. Sometimes you get hurt. Part of the territory.

Then it happens again. Only this time, the guy who got ‘thumped’ is tossed into a car like a sack of potatoes. Lou Boone, the promoter who runs Central States Wrestling with an iron fist, knows you saw something and offers you a ‘push’ if you keep your mouth shut.

A push. Every jobber’s dream. To get to win some matches, to get to be on the big cards in the big arenas. You want it more than anything. You begin thinking you imagined the sack-of-potatoes guy – until it happens again.

Now, you have to choose between wrestling fame and doing the right thing. Before this is over, someone else will be dead. And you don’t want it to be you…

Fight Card: Push is based on the short story “Push Comes to Shove,” selected by Lawrence Block for the Best American Mystery Stories series. 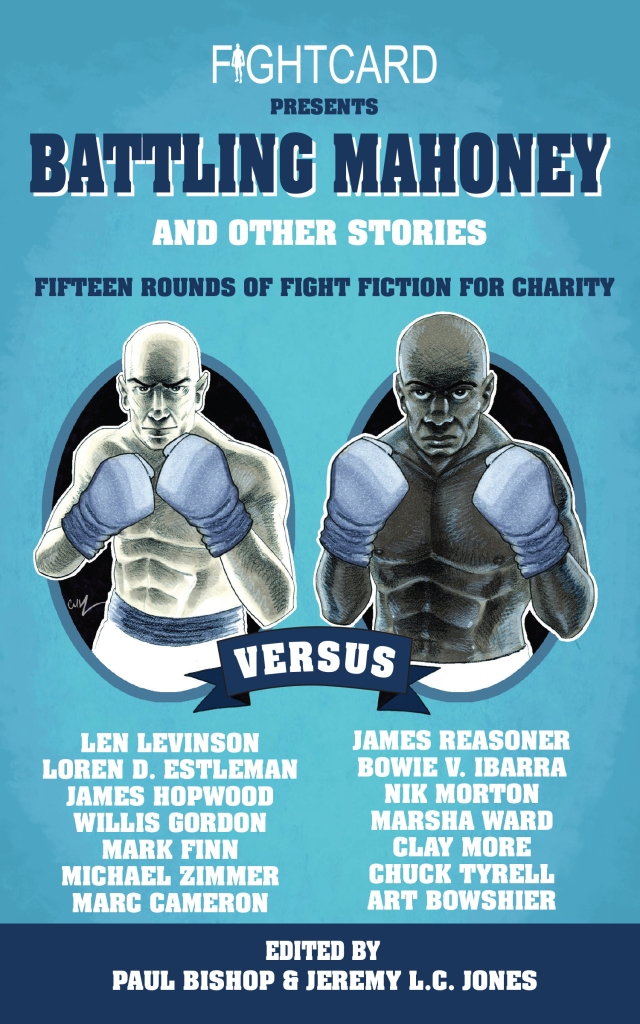 I am running a little behind in sharing this – however it’s still worth shouting about. The second Fight Card charity anthology, Fight Card Presents: Battling Mahoney & Other Stories is available from Amazon as an e-book for $2.99 with 100% of the proceeds going to help the family of the late Jory Sherman. A paperback version will follow shortly.

Inside its pages, you’ll find my short story, ‘Abbott & Costello Meet the Brown Bomber’ – a piece of speculative fiction about the famous comedy duo meeting boxing great Joe Louis (as Lou gets ready to film his fight scenes – as Lou the Looper – in Abbott and Costello Meet the Invisible Man).

Compiled by Paul Bishop and Jeremy L. C. Jones, 100% of the proceeds from these anthologies go directly to an author-in-need or a literacy charity. Words on paper are the life blood of a writer. The writers in this volume were willing to bleed in order to give a transfusion to one of their own – and then continue to bleed to give a transfusion to literacy charities in support of that most precious of commodities…readers. They are true fighters, every one… 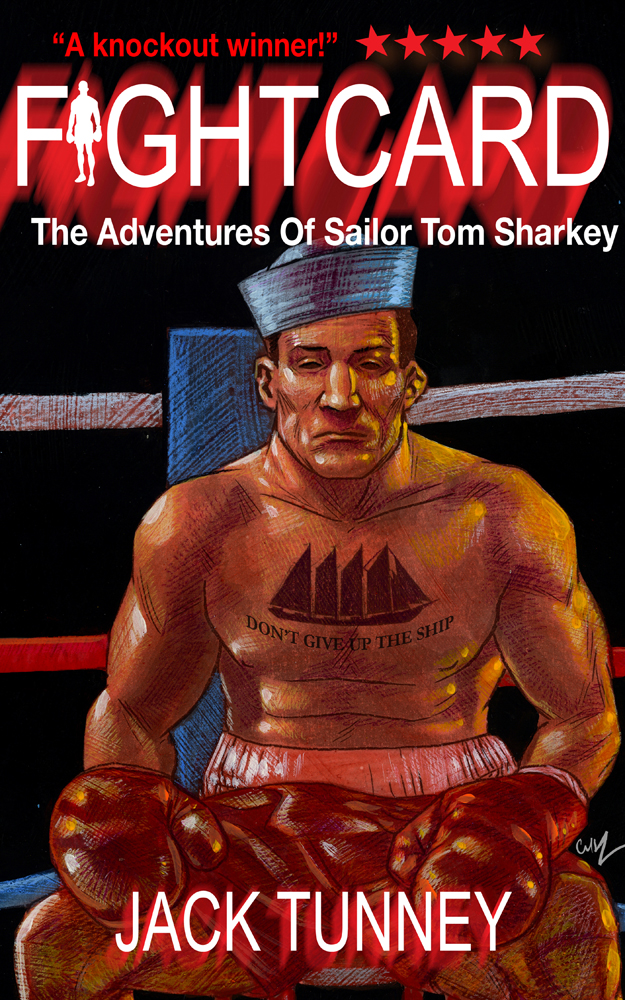 He was one of the greatest heavyweight boxers to enter the legendary squared circle during the Golden Age of Boxing. Standing a mere 5’ 8”, Sailor Tom Sharkey was one of boxing’s most feared opponents… Gentleman Jim Corbett, Bob Fitzsimmons, Kid McCoy, and Jim Jeffries all agreed he was their fiercest opponent and gave them their toughest fights. A colorful boxer both in the ring and out, he retired in 1904 after several legendary and controversial failed attempts to win the championship belt.

That’s the story you know – But it’s not the end of Sharkey’s story – not by a long shot… In the tradition of Robert E. Howard’s humorous Sailor Steve Costigan boxing tales, this action-packed collection of rowdy, bawdy, burlesque, tall Texas tales feature Sailor Tom Sharkey’s adventures after he hung up his professional gloves.

Thrill to Sharkey’s brush with Hollywood’s “It” Girl, Clara Bow… Get chills as Sharkey and Kid McCoy faces down a maniacal bandit… Feel the heat as Sharkey rides the rails with Jim Jeffries and the Vaudeville Carnival into a clashes with a mad scientists and mummified menaces… Watch as Sharkey plays Santa Claus to a bunch of Tammany Hall orphans and end up with a tiger by the tail – literally – and much more!
These are the Untold Tales of the Wildest Tale-Teller of Boxing’s Golden Age!

The Adventures of Sailor Tom Sharkey 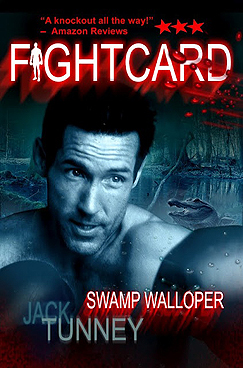 Swamp Walloper is the follow up to Felony Fists, the first book in the Fight Card series written by Paul Bishop. Fists saw L.A. cop, Patrick ‘Felony’ Flynn fighting on two fronts, first corruption on the streets, and then duking it out with one of gangster Mickey Cohen’s minions – it was a fantastic, uplifting story with a knockout ending.

Walloper heads in a different direction, and sees Flynn plying his skills – as a cop first and as a fighter second – in the Crescent City, N’Awlins, and in the croc infested Bayou Sauvage. The villain of the piece is a crooked prison warden named Lucas Trask – a man steeped in dark voodoo rituals.

The tale is pure pulp, dripping with steamy New Orleans atmosphere, and featuring great characters – heroes you want cheer, and villains you want to hiss. The action packed climax will raise the hairs on the back of your neck. Like Felony Fists before it, Swamp Walloper punches above its weight and recommended to all fans of rapid-fire adventure. 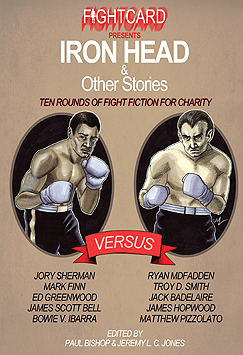 The Fight Card team flexes its muscles for a good cause. Iron Head and Other Stories is the first of several charity anthologies being released by the Fight Card team over the next few months, and it includes my vintage fight fiction short, Bushwhacked – written under the pen name James Hopwood.

All monies made from this project go to revered Western (and other genres) writer, Jory Sherman who has racked up a stack of medical bills. Over the years, Jory has not only been a prolific writer, he has been a mentor to many other up and coming writers.

Here’s the blurb from Bushwhacked.

Trooper Gladstone Farrell of Victorian Colonial Police Force was corrupt as they came.

Farrell had a fearsome reputation throughout the Central Victorian Goldfields. He was not in the least concerned at keeping the peace. As far as he was concerned, ‘Gold Fever’ was about money, and he did everything possible to get his share. However, this did not include hard labor, such as digging or panning for gold. His methods were much simpler. He would allow others to do the hard graft, and when they had found a few ounces he would swoop – always in the capacity of a custodian of the law. Most of the miners in the area didn’t have licenses, so when Farrell came calling, they either had to pay a portion of their diggings or face a hefty fine. Either way, Farrell got their gold or their money.

When Farrell swooped on the Clancy brothers for mining without a license, they made an unusual proposition to keep from going to jail. Danny Clancy was a bare-knuckles fighter; but not an honest one. His next fight was fixed, and his opponent was set to fall in the sixth round. Farrell muscled in on the deal, intending to collect two ways – first taking his cut from the Clancy brothers, and secondly, cleaning up with his own side bet.

James Hopwood (pen name of David James Foster), author of King of the Outback, a hard punching story in the Fight Card series is back with another knuckle bruising tale. A tale in which nothing is as it seems, and in which someone will be Bushwhacked!

Even if you’ve already grabbed a copy and read Bushwhacked, there are nine other great stories in this collection and at only US$1.99 – less than a glass or beer or cup of coffee – there’s plenty of fine entertainment to be found in these pages, and you’ll be helping a good cause.

You can find Iron Head and Other Stories at Amazon.

Compiled by Paul Bishop and Jeremy L. C. Jones, 100% of the proceeds from these anthologies will go directly to an author-in-need (in this case, revered western writer Jory Sherman) or a literacy charity. Words on paper are the life blood of a writer. The writers in this volume were willing to bleed in order to give a transfusion to one of their own – and then continue to bleed to give a transfusion to literacy charities in support of that most precious of commodities … readers. They are true fighters, every one …

Iron Head & Other Stories
Permission To Kill
Create a free website or blog at WordPress.com.